The virtual event will offer presentations from the local professional refugees in the Greater Lansing area. These professionals have been living in the United States for over five years and continue to have positive influence. Some of the backgrounds include Bosnia & Herzegovina, Somalia and Sudan. The role of UN agencies as well as Sustainable Development Goals #16 (Peace, Justice and Strong Institutions) and #8 (Decent Work and Economic Growth) are addressed in this session.

Click here to view a recording of this special talk

The Challenges of Peacebuilding in Mali. What type(s) of peace for a globalized conﬂict?

Speaker: Dr. Welore Tamboura from Mali will present on the current situation in Mali - and the role of the United Nations.

What is the context of the current crisis in Mali, which began in 2012 as a result of the military coup and the occupation of the north of the country by jihadists? This led to French intervention under a UN mandate in 2013, and a major military deployment in the North. One of the current concerns is the emergence of inter-ethnic and inter-tribal conﬂicts that threaten the very future of the country despite the signing of a peace agreement between the rebel groups and the government. France's intervention stopped the terrorists' advance towards the capital, and the peacekeeping operations have been vital. But how to achieve a sustainable peace in Mali? The Truth, Justice, and Reconciliation Commission (CVJR) and its role as a part of the framework of transitional justice, will be explored. It aims to ensure four objectives: recognition, trust, the rule of law and ultimately reconciliation. This ambitious project is therefore based on a social dialogue with a diversity of actors in order to promote peace and reconciliation, which is in alignment the United Nations Global Goal 14 (Peace, Justice, and Strong Institutions).

Bio: Dr. Welore Tamboura, RCAH’s ﬁrst full-time visiting professor for an entire academic year, is a communications professor in the University of Letters and Human Sciences of Bamako (ULSHB) in Mali. She is an MSU Alliance for African Partnership (AAP) visiting scholar.

Welore Tamboura received a merit scholarship from the Malian government upon completion of her high school baccalaureate, allowing her to complete her higher education in France.

She is an associate researcher with the Groupe de Recherche sur les Enjeux de la Communication (GRESEC) and has taught for several years in the Information- Communication department of the Grenoble Alpes University.

In 2018, she returned to Mali and is an assistant professor at the University Institute of Technology (IUT) of the University of Letters and Human Sciences of Bamako.

In her research, she is interested in public communication as a tool for social change and more specifically in prevention campaigns.

Since mid-September 2019, Dr. Tamoura has been working at Michigan State University's Residential College in the Arts and Humanities (RCAH) as a post-doctoral fellow of the Alliance of African Partnership (AAP).  As part of this research program, she works under the supervision of the Dean Stephen L. Esquith (MSU) and Professor Macki SAMAKÉ (ULSHB) on the theme of Peace Education in Mali.

5 Years of War with Yemen

Shireen updated us about the humanitarian crisis in Yemen and shared her ideas for action.

This was a part of our celebration of International Women’s Day on March 8.

Bio: Dr. Shireen Al-Adeimi is an assistant professor of language and literacy at Michigan State University, where she focuses on building students' literacy through classroom discussion. Since 2015, she has also played an active role in raising awareness about the U.S.-supported, Saudi-led war on her country of birth, Yemen. Her writings on the topic are featured in In These Times magazine and elsewhere, and she has been interviewed by various outlets including NPR's Democracy Now! and NBC's Why Is This Happening. Through this work, she aims to encourage political action among fellow Americans to bring about an end to U.S.-supported intervention in Yemen.

through Socially and Environmentally Conscious Innovation"

Cities are hubs for ideas, commerce, culture, science, productivity, social development and much more. At their best, cities have enabled people to advance socially and economically. With the number of people living within cities projected to rise to 5 billion people by 2030, it’s important that efficient urban planning and management practices are in place to deal with the challenges brought by urbanization.

Many challenges exist to maintaining cities in a way that continues to create jobs and prosperity without straining land and resources. Common urban challenges include congestion, lack of funds to provide basic services, a shortage of adequate housing, declining infrastructure and rising air pollution within cities.

Rapid urbanization challenges, such as the safe removal and management of solid waste within cities, can be overcome in ways that allow them to continue to thrive and grow, while improving resource use and reducing pollution and poverty. One such example is an increase in municipal waste collection. There needs to be a future in which cities provide opportunities for all, with access to basic services, energy, housing, transportation and more. 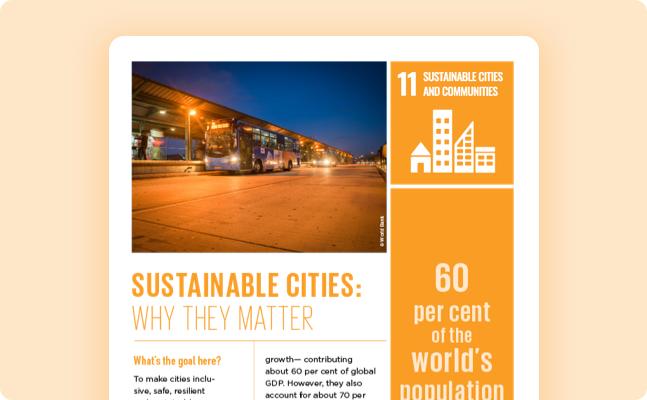 Why it matters: Sustainable Cities and Communities 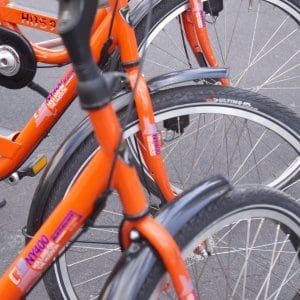 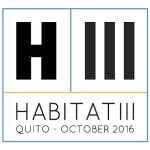 The United Nations Conference on Housing and Sustainable Urban Development, took place in Quito, Ecuador from 17-20 October 2016, and was the first UN global summit on urbanization since the adoption of the 2030 Agenda for Sustainable Development.

Habitat III offered a unique opportunity to discuss the important challenges of how cities, towns, and village can be planned and managed, in order to fulfill their role as drivers of sustainable development, and how they can shape the implementation of the Sustainable Development Goals and the Paris Agreement on climate change.

In Quito, world leaders adopted the New Urban Agenda which set global standards of achievement in sustainable urban development, rethinking the way we build, manage, and live in cities through drawing together cooperation with committed partners, relevant stakeholders, and urban actors at all levels of government as well as the civil society and private sector.

"A Future Without Waste –

The increasing threat of climate change and ecological unravelling and their underlying causes on a finite planet force us to look at reducing waste in many forms if we are to meet the Sustainable Development Goals of “Leave No One Behind”. SDG Goal #12 directs our attention to “Responsible Consumption and Production”. We will look at the opportunities to reduce waste and how it might impact the other goals.

Terry Link is a GLUNA board member and former founding director of MSU’s Office of Campus Sustainability, served on Shiawassee and Clinton County’s Solid Waste Committees, serving as chair of the latter. He’s been a board member/volunteer with Greater Laingsburg Recyclers for 30years.